As of June 27, 2013 same sex marriage in Los Angeles, and all of California, resumed following the Supreme Court of United States ruling that that made Prop 8, the anti-gay marriage proposition, invalid. Gay marriage resumed the next day and a few hours after that I officiated my first lesbian wedding in over 4 years. In the following days I married many couples who were married in heart for many years and who rushed to make sure that they now had legal recognition of their relationship.

It has been an honor for me to be a part of many of these same sex weddings. I don’t see them as anything but a union of love. Being an attorney, I was waiting for the Supreme Court to see the inaccuracies of letting popular vote trump a court ruling and a sane ruling. It’s all about love and human rights. Ironically, that special day of June 27th happens to be my wedding anniversary. It just seemed so right. Four years earlier, on that same day, I married Kendra Wilkinson and Hank Baskett at the Playboy Mansion.

I can issue you a confidential marriage license on the spot without any waiting in lines at the County Clerk’s offices. This is the type of marriage license I recommend as it protects your private information and makes your marriage legal, but not available to the general public, which includes stalkers, haters and identity thefts.

I would be happy to perform any gay wedding, whether it is husband and husband or wife and wife. Please contact me to arrange this. I can be there on a moment’s notice or for a planned same sex wedding. Either way, congratulations.

On my other wedding officiant website, OfficiantGuy.com, I wrote a series of three popular blog posts about why it’s so very important to get married when you find your soulmate. I can help you to get married in LA right now. I use the term LA loosely…I can go anywhere in Southern California to help you get married.

I am often asked to rush to a hospital to officiate a bedside wedding when one spouse is either injured or threatened with a serious illness that may end tragically. The tension is usually very high and I am required, by law, to make sure that the hospitalized spouse can actually be coherent before I officiate a legal wedding ceremony. What I essentially said in the 3 blog posts is that your wedding should be an incredible celebration of joy and I wish for you that if you are in love. There are many benefits to being married, aside from companionship. There are legal benefits that comes with marriage.

I mentioned some real events, and I have walked away crying from some hospital weddings. These bedside weddings are powerfully emotional and I wish they were all under better circumstances. This was from the surviving spouse of one the weddings I officiated in a hospital:

“You performed my wedding to Jeff…. It was bedside. Jeff died the next day. Thank you so much for coming on such short notice. Jeff looked very happy during the ceremony and that’s the memory I am cherishing. I greatly appreciate what you did for us.”

It’s moments like this that get me choked up.

Have you seen my new wedding officiant video? We had a little fun with it. After so many years of being on many television shows my wife convinced me that I should have my own video I hope you like it.

The short video above contains some stills taken at various weddings and of some of the celebrity weddings I’ve performed. But you don’t have to be a celebrity in order for me to marry you. I can officiate any kind of wedding ceremony all over Southern California. I can issue your marriage license in Los Angeles County for an LA County marriage.

And if you need an LA Wedding Officiant, then please consider me. 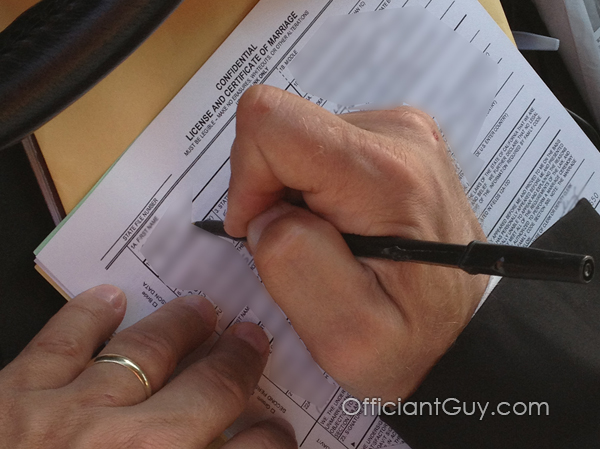 If you don’t want a confidential marriage license (which I don’t understand) then you must go to the County Clerk’s Office to get one yourself. There are many reasons why you don’t want to do that. I’ll explain on another page.

So, give me a call or an email. I can make it easy for you, and that’s what a wedding should be. Easy.

In Los Angeles County and through the State of California marriage requirements are basically in three simple steps:

If you would like to avoid all the hassle and headaches navigating through the marriage requirement process, give me a call. I can make it really easy for you to get married in Los Angeles or almost anywhere is Los Angeles County. That’s my job as a Los Angeles wedding officiant. 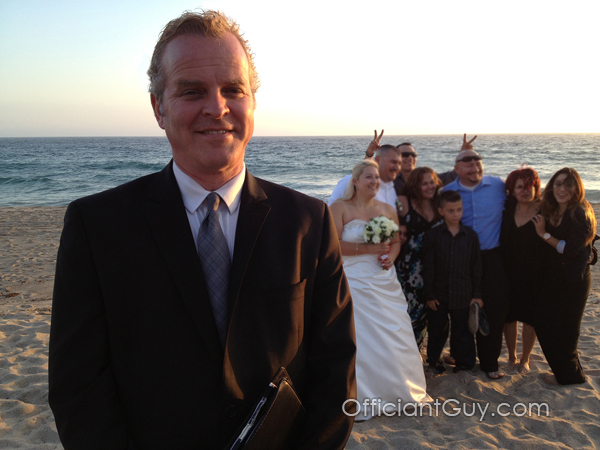 What is a wedding officiant? Section 400 of the California Family Code provides that marriages may be solemnized by any of the following who is 18 years of age or older:

* A minister, priest, rabbi or other authorized person of any religious denomination

* A judge or magistrate who has resigned from office

* A legislator of constitutional officer of California or an member of Congress who represents a district with California.

Either way, you are married after you’ve gone through the paperwork and the ceremony. And that is what a wedding officiant is.